U-18 Kolkata Derby turns violent, police break up riot on the street

A MINI RIOT took place in Kolkata yesterday after the match between the U-18 teams of East Bengal and Mohun Bagan. The Kolkata Derby fixture, part of the group stages of the U-18 I-League, was held yesterday at the East Bengal Ground. 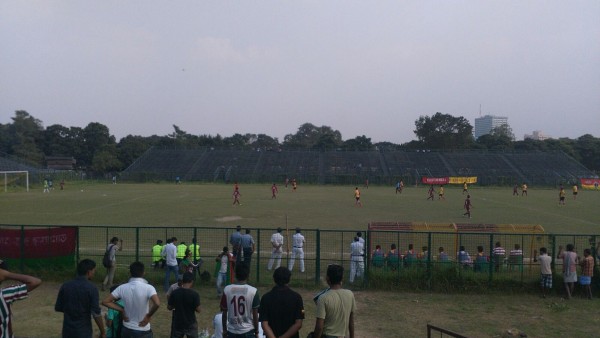 Several supporters from both clubs showed up to watch the match. Most of the crowd comprised of young, college-going supporters who mobilised through WhatsApp groups to extend their support for their clubs' junior teams as well.

But unlike a senior Derby match where separate seating arrangements are made for the supporters of both rival clubs, it was not the case yesterday. As a result, verbal clashes between the two sets of fans continued throughout the match.

After the match ended in a 1-1 draw, two groups of supporters faced off with each other on the road outside the club tent. Scuffles soon became a brawl.

As news of violence broke, other supporters from both the club tents - which are situated at a stone's throw from each other - joined the fight armed with shovels, bamboo sticks and bricks.

The fight spread to the Gostha Pal Sarani, where the traffic had to be halted because of the riot. By the time police arrived to break up the brawl, several fans from both sides had suffered bleeding injuries. Some female supporters were also injured.

This incident once again highlights the need to arrange proper security and separate seating whenever these two clubs face each other. Due to fans coming together on the internet, number of fans attending matches is growing. Women are playing a more active role in this newly founded fan culture. And the fans are religiously showing up even at the junior team's matches. Not having enough security is simply inviting trouble.

Hopefully the organizers will take a lesson from this incident and in the return leg there will be adequate security arrangements for the matchday crowd, which is potentially going to be much bigger in size after today's incident.

Mohun Bagan held by Aryan; docked points for U-23 rule violation
Previous
Next