Messi, Ronaldo, Zlatan and RVP in Kerala Blasters team, thanks to eager fan

WHAT DO YOU DO when the football club you love and support isn't living up to your expectations?

Numerous clubs around the world take a lot of flak from their own fans for bad performance on the ptich and incompetence off it. The fans' frustrated outbursts come in the form of pitch invasions or protests at the club, or angry tweets and trending hashtags shaming club officials. Sometimes choose innovative, if disrespectful ways of displaying their frustration; the "bin bag" protest at Emirates and the 'Moyes Out' banner towed to an airplane flying over Old Trafford are recent examples of such fan-led dissent.

Another popular form of protesting a club's activities or trolling is making ridiculous, pointed edits to its wikipedia page. Yesterday, a Kerala Blasters fan residing in United Arab Emirates, resorted to such misbehaviour. Frustrated by the lack of transfer activity from the Kochi-based ISL franchise, especially at the front, he decided to edit their current squad to include a number of world class players that would indeed prove to be very effective signings for the Blasters. 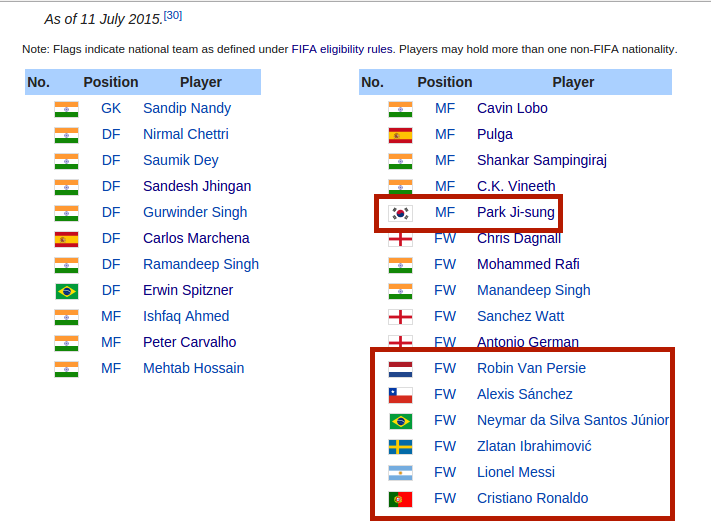 There is little doubt that the inclusion of Park-Ji-Sung would bolster the Kerala Blaster midfield. And forwards like Robin van Persie, Alexis Sanchez, Neymar, Zlatan Ibrahimovic, Lionel Messi and Critistiano Ronaldo would make the Blasters' attack one of the deadliest in ISL, at least on paper.

To make it known that he/she held the Kerala Blasters management responsible for the franchise's lacklustre performance in the transfer market, the user edited the 'Team management' section on the wikipedia page to suggest some much-needed change in the adminstration. As Head Coach Peter Taylor was proving to be inadequate according to the user, the name of famous Malayalam movie star Mohanlala was listed as the 'Head Head Coach.' And to highlight the need for better promotion, another famous actor Suraj Venjaramoodu was included as Club Ambassador.

This correspondent believes that if Mohanlal went into a player's house wearing a scowl, shooting and kicking the daylight out of a few security guards along the way, the resident player would already be two-thirds convinced to sign for Kerala Blasters. A couple of witty lines from Suraj Venjaramoodu would do the rest. Using this highly effective good cop - bad cop routine, Kerala Blasters could soon secure some of the best players the world has to offer for themselves.

Not to mention the thought of an angry Mohanlal would render players pretty much incapable of losing the ISL final by a last-minute goal.

The wikipedia page has since been corrected but the older, wittier and arguably better version can still be accessed here.

While pranks like this by themselves don't amount to much and are often dismissed as unruly fan behaviour by clubs administrations, it would be helpful if the Kerala Blasters identify the underlying follies among their ranks that caused such an outburst, and take corrective measures. The ISL season starts in October, so there is still time to turn things around, and win over fans like this one who are vocal, naughty but loyal and true lovers of their clubs.

UPDATE: And they just did. Kerala Blasters have released a statement addressing their fans' anguish, and promised lots of transfer action soon.

Launch of SAFF Club Championship likely to be delayed to 2024

ISL 2022-23: Kerala Blasters duke it out with Bengaluru FC in Kochi, emerge 3-2 victorious

ISL playoff final tickets fly off the shelf within minutes