'Footprints in the sand' - A 60 year journey with Salgaocar FC

GOA'S FAMED FOOTBALL CLUB, Salgaocar Sports Club, which recently completed 60 years, launched a book ‘Footprints in the Sand’ to commemorate the history and legacy of their journey.

The book, written by senior football correspondent, Marcus Mergulhao, chronicles the history of the club over six decades right from its inception in 1956 and highlights the contributions of its players and coaches who transformed Salgaocar into a powerhouse in Indian football. Among its earliest stars were first captain and forward Joaquim Goes, defenders Candido Abreu and Menino Figueredo (Goa’s first captain in the Santosh Trophy and first international), midfielder Alisab Sadekar, to name a few.

Subsequently, coaches like the 1952 Olympian T Shanmugham, Shabbir Ali and the Moroccan Karim Bencherifa guided Salgaocar to some super triumphs including those in the Federation Cup (in 1988, 1989, 1997 and 2011), National Football League (1999) and I-League (2011) besides other major national tournaments. Salgoacar have contributed six India captains and about 40 internationals to the national cause, including legends such as goalkeeper Brahamanand Sankhwalkar, Bruno Coutinho (both Arjuna awardees), Derrick Pereira, Savio Medeira, Mauricio Afonso, Climax Lawrence.

The book was launched at the hands of three of Salgaocar’s senior most players, Alisab Sadekar, Candido Abreu and Alcantara Barreto in the presence of Mr Shivanand Salgaocar, Mrs Ranjana Salgaocar club’s vice-president Mr. Vivek Salgaocar and Ms Swati Salgaocar.

The club also honoured some of its long-time serving players at the celebration which took place at Panjim on the birth centenary of its founder, the late Mr. V. M.Salgaocar.

Launched in 1956-57 under the name Vimson, the club went on to win the Second Division League in its debut year in an unrivalled manner. Later, the club came to be known as Clube Desportivo Salgaocar before 1961 and Salgaocar Sports Club post Goa’s liberation. The current name and logo was coined and launched in 2012.

Speaking at the event; club president Mr Shivanand Salgaocar said “My father started the club to give back to Goa and to promote Goan footballing talent, a responsibility which I take very seriously. Our youth development and grassroots initiatives are an extension of this mandate.”

Since its inception, Salgaocar FC has evolved from a team of part-time footballers playing locally in Goa, to a formidable national-level club with an acclaimed grassroots programme, but the purpose of the existence of the club has remained the same – to promote football in Goa and give an opportunity to Goan footballing talent. The Community Outreach Programme saw over 650 children from in and around Vasco enrolled in its third year. In the Youth Development Programme, the U-14 and U-16 teams were both crowned Goa Football Association league winners, while the U-18 team topped the Goa zone of the junior I-League and the U-20 team is on the verge of being promoted to the GFA First Division.

Vice-President – Youth Development, Ms. Swati Salgaocar, added “We at Salgaocar FC have always maintained that football is more than just a game, it’s our passion, and looking at everyone gathered here today I can safely say that Salgaocar FC is more than just a club, it’s a family. It was these sentiments that led us to document the history of the club and chronicle its achievements. Having personally been involved with the book, it has been overwhelming to read accounts of players and coaches over the years and it makes me proud to be a part of this tradition.”

Salgaocar FC president Shivanand Salgaocar releases the book along with three of the senior-most players from the 1950s (from left to right) -- Alcantara Barreto, Candido Abreu (both defenders) and Alisab Sadekar (midfielder). Also present on stage are other members of the Salgaocar family. 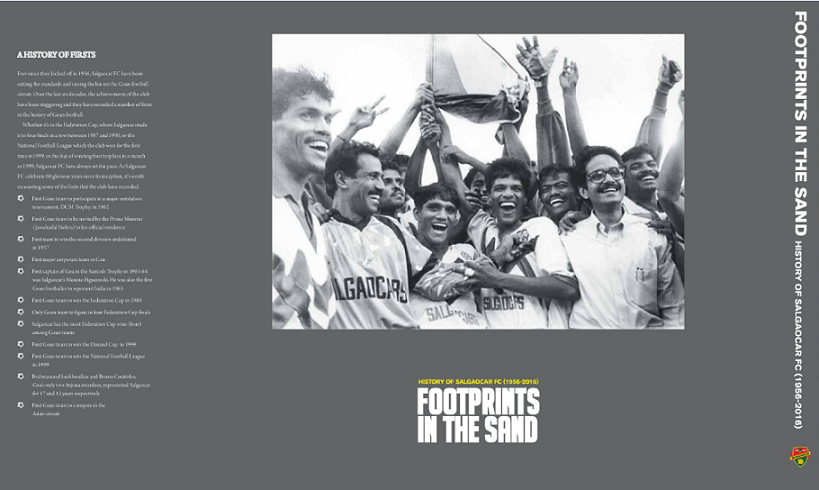 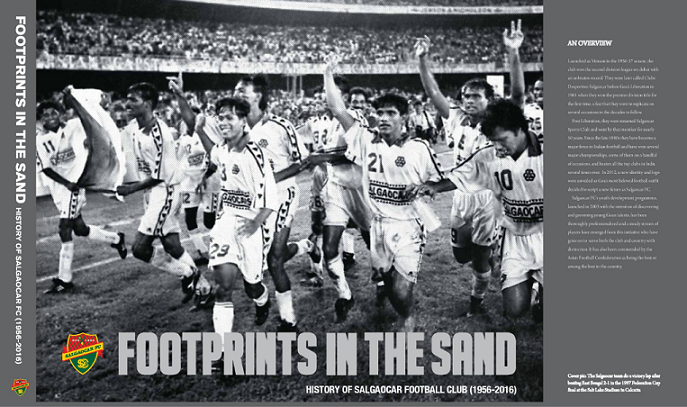 SUNBURNT TERRACE: What happens in Goa... Indian football is flirting with a perilous tipping point

As part of the club's Diamond Jubilee celebrations in 2016, we intend to release a book on it's 60 glorious years of...