Table-toppers Dabang Smashers TTC, owned by DoIT Sports Management, became the first side to qualify for the semi-finals of this season of UTT notching a commanding 15-6 win over Empowerji Challengers at the Netaji Subhash Chandra Bose Indoor Stadium in Kolkata, on Tuesday.

Led by highest ranked Indian paddler Sathiyan Gnanasekaran, Dabang Smashers TTC outperformed in the group stage of the tournament. The side smashed their way to three wins, to sail through to the semi finals. With the likes of Manika Batra, Yoshida Masaki, Sakura Mori, Archana Kamath, Sanish Ambekar, Adriana Diaz and Cedric Nuytinck, the Smashers proved to be a strong unit that sealed their place at the top of the table. A key factor in the success this season has been the mixed doubles pair of Sathiyan-Sakura, who have stayed unbeaten in UTT season 2.

This is the 2nd time in a row that the side have qualified for the semi-final stage, and the Smashers have their eyes set on building on the success of this campaign with a place in the final.

Commenting on this, the captain of Dabang Smashers TTC - Sathiyan Gnanasekaran said, “It has been an amazing journey for The Smashers this season as we have qualified for the semifinals of UTT for second year in a row. I’m really looking forward to the big matches and I’m confident that Dabang Smashers TTC can smash their way into the final!”

Mrs. Radha Kapoor Khanna, Founder & Executive Director, DoIT Sports Management said, “I’m glad to see that the Dabang Smashers TTC has played as one unit and have booked their place in the semifinals. We believe in investing in young talent and developing sport in India, The Dabang Smashers is a testament to that philosophy - being the youngest side in the tournament and one booming with talent.” 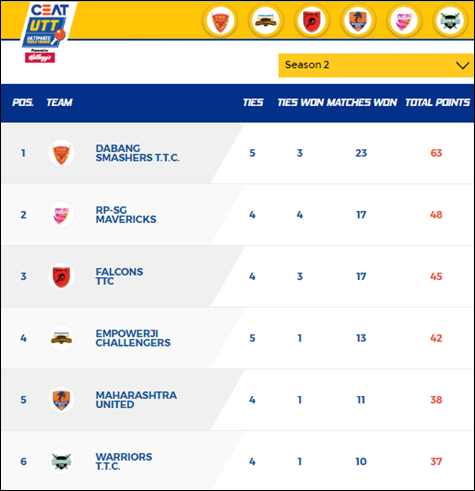 With inception of UTT, Indian table tennis is headed in the right direction: Foreign coachesÂ

Ultimate Table Tennis to invest Rs. 20 Lakh into the sport

#TFGinterview: Dabang Smashers hope to make it big in UTT -- In conversation with former India No.1 Anthony AmalrajÂ