The newly launched cleats behold a classic look, comprising a predominantly white colour, a red collar and the quintessential three black stripes. While Adidas has shuffled the colorway, it has interestingly forgone the laces on its lightweight boots.

Unsurprisingly, the ‘Purecut Laceless’ system is one of the significant features of the Predator 18.1. The new design provides a clean upper and a snug fit.  The forged knit upper integrated into the mid-foot fuses the cleats with the feet. On the other hand, the layer of ‘Controlskin’ on the upper provides extraordinary comfort, essential support and is designed to produce optimal grip. The immaculate textured finish brings a control element to the forefoot and the instep. 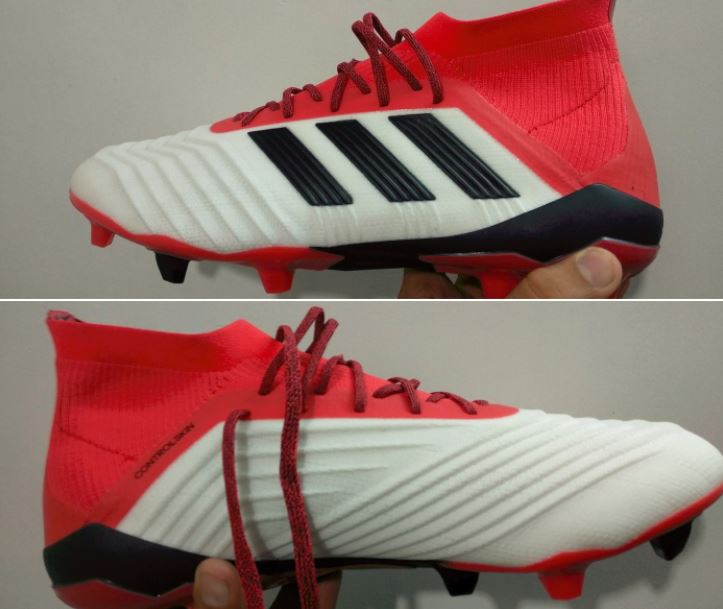 First hitting the scene in 1994, these Cold Blooded Predators are back to make more history. For a long time, the boots have been synonymous with players such as David Beckham, Zinedine Zidane and Alessandro Del Piero.

The Cold Blooded is vastly different from the Precision 2000. The classic Precision 2000, which is made of premium Kangaroo leather and has a Traxion plate, is distinctly heavier and bulkier than the Predator 18.1.

Over the years, Adidas made various remakes of the red, black and white model as it also had the rubber fins removed in 2012. The modern versions of the predator were produced up till 2015 when the 21-year stint came to an end. While there were speculations that Adidas had gotten rid of the iconic boot series, hardly did anyone know that they would be working on a top-secret project (The Predator 18). They are no overnight success as it has taken Adidas about two years to develop it from start to finish.

The Cold Blooded Predators, have been tested and endorsed by Paul Pogba and Mesut Ozil along with a bunch of amateur footballers across Europe. The players have said it and it is indeed true that the ‘Cold Blooded’ are an upgrade to the ACE 17+ and that they can be worn straight away without having to break them in first.

Asian Boxing Championships -- Hussamuddin off to a winning start