Back in the IPL fold after missing two seasons, Rajasthan Royals played their cards judiciously to ensure they have a team the fans can connect with while they retain their own unique flavour.

Like the Royals, the Chennai Super Kings also made a resounding entry into the cash-rich league. After having handsomely retained MS Dhoni, Suresh Raina and Ravindra Jadeja, the two-time champions went hammer and tongs to buy back marquee all-rounders in Dwayne Bravo (6.4cr) and Shane Watson (4cr) respectively.

On the other hand, the Kolkata Knight Riders too were keen on retaining their core combination and ensured they got Robin Uthappa, Kuldeep Yadav and Piyush Chawla through the RTM option. But perhaps, their biggest buy for the day was Chris Lynn (9.6cr).

Coming into this auction, RCB who have always suffered due to lack of potency in their bowling ensured they filled up a few gaps. The Bangalore franchise who are yet to win the IPL title nailed the likes of Chris Woakes and Umesh Yadav to bolster their seam department.

Afghanistan's premier spinner Rashid Khan was expected to draw tremendous interest and quite a few teams went all guns blazing to rope in the 19-year-old sensation. However, it was SRH who outsmarted the others by snatching the leggie through their RTM option for a whopping 9cr.

Finally, the DD management also breathed a sigh of relief after picking some marquee names in Glenn Maxwell (4.2CR), Colin Munro (1.9CR) and Gautam Gambhir (2.4CR). It's shouldn't come as a surprise if local boy Gambhir leads the DareDevils in the 11th season.

Highlights of the day:

Sunrisers Hyderabad were the most active franchise as they bought 14 players for the day.

Ben Stokes was the highest paid cricketer for the day 12.5cr.

Teams focus on retaining their core set-up. Besides KXIP and DD, the rest were clear on their objective.

RTM option was smartly used by the franchises. The likes of Kieron Pollard, Kuldeep Yadav, Dwayne Bravo and Yuzvendra Chahal were bought back.

Steal of the day: Kiwi opener Colin Munro was absorbed for only 1.9cr from a base price of 50L by the Delhi Daredevils. 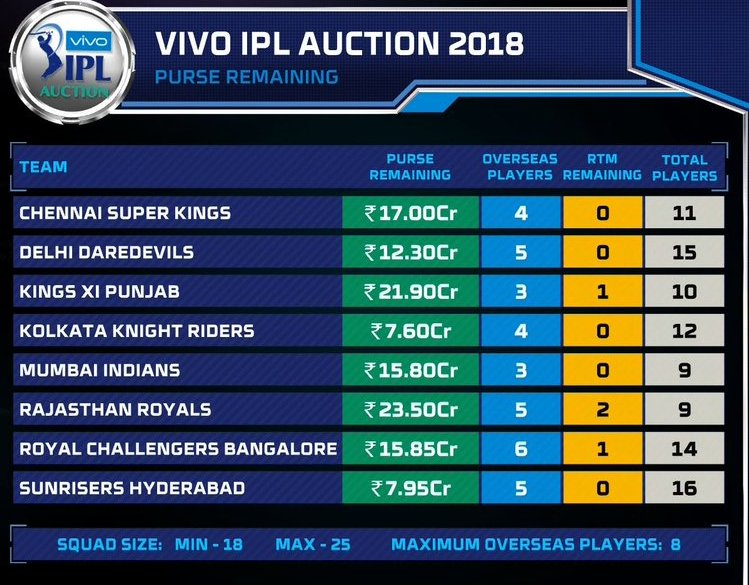 An ode to Mahendra Singh Dhoni

Sunil Gavaskar -- the man who endowed Indians with a 'sunny' perspective

Need to hold IPL 2020, and important role of BCCI in world cricket post-Covid highlighted in discussion on 'Impact on Business of Cricket'

"IPL could be possible, should be played in the country, likelihood of only Indian players high"

RETRO TIME: Aussies & Kiwis go back in time with their jerseys
Previous
Next