FC GOA carved out back to back identical 2-1 victories where they had to work their socks off to earn another valuable win in Kerala. The win solidifying Goa’s position at 4 th at 19 points but with the advantage of the game in hand can easily leapfrog over Bengaluru if they secure the home tie win against Mumbai.

Bengaluru are due to play their AFC Cup tie prior to their North East United encounter who have started to show good form as of late. FC Goa quickly got off the blocks through a sublime move by Brandon and typically poachers finish by Coro. Coro will take the plaudits for the goal but the move was a pass and move special initiated by Brandon. Everything about this goal was a master class.

This is where a 4-2- 3-1 formation brings out the best of the players who start out wide and cut in using the 1-2 with the double pivoted midfielder as a key link in this case Jahouh. In doing so, Brandon was able to assume a central position and despite the degree of difficulty with his peripheral vision being obscured by Jhingan and Rio Anto, he not only played a fantastic through ball pass but gave it the necessary spin drag to hold back in the path of Mandar’s run. Credit to Mandar for faking the shot to draw Coro’s Markers forward while Coro gained isolation holding back from his run, the finish that followed was as cool as a cucumber on a first fake.

Worth noting the tactical adjustment by having Brandon and Coro switch flanks mid way vs Jamshedpur continued to play dividends in this as well. 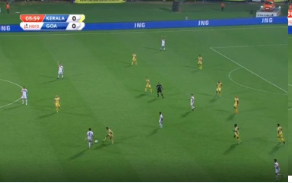 Ideally being a top heavy side on the attacking front, the plan would have been to attack Kerala further and score the 2 nd goal to get out of sight but what followed was an indifferent phase where the approach was difficult to call as to whether they wanted to stay compact and get Kerala on the counter or Kerala tightened up their wide areas by staying closer on players like Mandar and Brandon who were bossing the game in the early quarter. It’s always a risky proposition given how
error prone the Goa defense is and Katti who after a poor earlier goal kick followed with another, this time Wes Brown strategically well placed much higher than his center back positioning directed a free header towards goal via lay off Hangal that gave Vineeth a free run at goal.

The flaws were obvious here. If as a goal keeper you opt kick it long instead of knocking it to your right center back
that clear your space, get the center backs to move ahead but the goal kick wasn’t strong and Vineeth couldn’t be played offside by Ali as a trailing Juste originally positioned to take a pass from Katti was still moving out of the box. This goal could have been avoided easily.

In Football you let the opposition build momentum on the back of a goal then you invite a lot of pressure. Kerala piled a lot of it in a 15 minute spell where Vineeth practically threw the kitchen sink at the FC Goa Goal with a combination of 2 scissor and an over head kick. Credit to Goa they absorbed that pressure and managed the game better. Their resolve was ultimately rewarded when Edu scored the game winner through a fantastic header. Edu thoroughly deserved it after seeing two
headers crashed the upright in previous games.

So a good win, Goa yet to lose a game where they score two goals. What is worth noting that they are beginning to manage games better thereby ensuring their defense is not pressurised. The odd defensive error comes in different forms but if they are limited and the offense do what they do best then I guess Lobera’s take on Artistole

“The whole is greater than some parts”

will hold him and his team’ fortunes in good stead.

Merge, says Zico. Is this the best way forward for Goa clubs?

Need one solid league in the near future for the sake of Indian football: Constantine

Its raining superstar for ISL after Pele, Rooney to visit